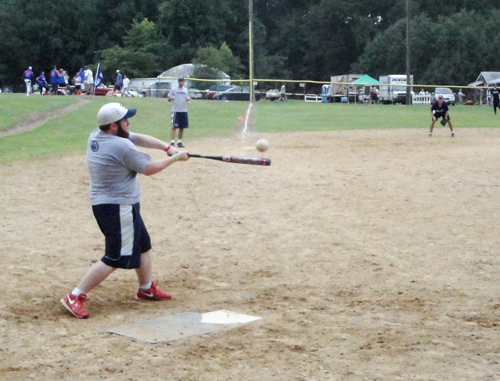 Join fellow alums and play softball against other alumni teams!

The MWCPSAA is happy to offer Chapter members the opportunity to play softball with fellow alums!  We play our games as part of the Capital Alumni Network (www.dcalum.org), which is a league made up of other Alumni schools, and pits us against other alumni teams like Michigan, Maryland, and Ohio State.

The season runs from mid-April until the end of August, with a majority of the 14 game season being played down on the National Mall, right under the Washington Monument.  The team starts with a preseason intrasquad scrimmage in early April, and then 9 weekday games (usually Thursday/Friday) down on the Mall, with 5 weekend games sprinkled throughout the summer (usually a couple double-headers).  The season ends with a league-wide softball tournament in Goddard, MD.  The tounament is spread over a couple wekeends in August, and with all the teams invited, ends up in a 1,300 person party.

The softball team has a very large roster, but is a great social atmosphere with many people coming to games just to hang out and have fun with their teammates. People will get fair playing time throughout the season, and when they're not in the game, will get to hang out and enjoy some drinks with fellow alumni!

For more information about PSU's alumni softball team, or any of the other Chapter sports teams, please email Meghan at sports@psuwashdc.org.